4. Turn off the Internet. The Web is a great resource and entirely unavoidable, but it will help you focus when you buy the Freedom app. Using a device like this not only rescues me from easy distraction, it also works as a timer. When you click on the icon, it asks you to choose the duration for which you want the computer to not have access to the Net. I choose sixty minutes, and this also helps me keep count of how long I have sat at my computer. 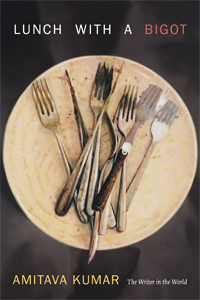 The following is from Amitava Kumar’s essay collection Lunch with a Bigot. A mix of memoir, reportage, and criticism, these essays explore how Kumar, a Professor of English at Vassar College, practices being a ‘writer in the world.’

When I was promoted to the rank of professor, the library at the university where I was then employed asked me to send them the name of a book that had been useful to me in my career. I chose V. S. Naipaul’s Finding the Center. The library then purchased a copy, which was duly displayed in one of its rooms, with a statement I had written about the book:

This was one of the first literary autobiographies that I read. Its very first sentence established in my mind the idea of writing as an opening in time or a beginning: that sentence conveyed to me, with its movement and rhythm, a history of repeated striving, and of things coming together, at last, in the achievement of the printed word: “It is now nearly thirty years since, in a bbc room in London, on an old bbc typewriter, and on smooth, ‘non-rustle’ bbc script paper, I wrote the first sentence of my first publishable book.” This first sentence—about a first sentence—created an echo in my head. It has lasted through the twenty years of my writing life. The ambition and the anxiety of the beginner is there at the beginning of each book. Every time I start to write, I am reminded of Naipaul’s book.

But that wasn’t the whole truth, neither about Naipaul, nor about beginnings. The sentence I had quoted had mattered to me, yes, and so had the book, but what had really helped was Naipaul’s telling an interviewer that in an effort to write clearly he had turned himself into a beginner: “It took a lot of work to do it. In the beginning I had to forget everything I had written by the age of 22. I abandoned everything and began to write like a child at school. Almost writing ‘the cat sat on the mat.’ I almost began like that.”

And I did that too, almost. About a decade ago, soon after I had received tenure, Tehelka asked me to come aboard as a writer. I was visiting my parents in India at that time; it was winter, and I went to the Tehelka office to talk to the editors. Later, when we were done, I was taken around for a tour of the place. There was a pen-and-ink portrait of Naipaul on the wall because he was one of the trustees. And high above someone’s computer was a sheet of paper that said “V. S. Naipaul’s Rules for Beginners.” These were rules for writing. It was explained to me that Naipaul was asked by the Tehelka reporters if he could give them some basic suggestions for improving their language. Naipaul had come up with some rules. He had fussed over their formulation, corrected them, and then faxed back the corrections. I was told that I could take the sheet if I wanted. A few days later I left India and the sheet traveled with me, folded in the pages of a book that I was reading. In the weeks that followed, I began writing a regular literary column for Tehelka, and, in those pieces, I tried to work by Naipaul’s rules. The rules were a wonderful antidote to my practice of using academic jargon, and they made me conscious of my own writing habits. I was discovering language as if it were a new country. Like a traveler in a new place, I asked questions, took notes, and began to arrange things in a narrative. I followed the rules diligently for at least a year, and my book Bombay-London-New York was a product of the writing I did during that period. Here, then, are “V. S. Naipaul’s Rules for Beginners”:

Do not use big words. If your computer tells you that your average word is more than five letters long, there is something wrong. The use of small words compels you to think about what you are writing. Even difficult ideas can be broken down into small words.

Every day, for six months at least, practice writing in this way. Small words; clear, concrete sentences. It may be awkward, but it’s training you in the use of language. It may even be getting rid of the bad language habits you picked up at the university. You may go beyond these rules after you have thoroughly understood and mastered them.

In their simplicity and directness, I do not think the above rules can be improved upon. A beginner should take them daily, like a dose of much-needed vitamins. Of course, rules can never be a substitute for what a writer can learn, should learn, simply by sitting down and writing. But I offer my own students rules all the time. On the first day of my writing class this year, I handed out xeroxed sheets of rules by Ray Bradbury, not least because he offers the valuable advice that one should write a short story each week for a whole year. Why? “It’s not possible to write 52 bad short stories in a row.”

1 Never open a book with weather. If it’s only to create atmosphere, and not a charac­ter’s reaction to the weather, you don’t want to go on too long. The reader is apt to leaf ahead look­ing for people. There are exceptions. If you happen to be Barry Lopez, who has more ways than an Eskimo to describe ice and snow in his book Arctic Dreams, you can do all the weather reporting you want.

2 Avoid prologues: they can be ­annoying, especially a prologue ­following an introduction that comes after a foreword. But these are ordinarily found in non-fiction. A prologue in a novel is backstory, and you can drop it in anywhere you want. There is a prologue in John Steinbeck’s Sweet Thursday, but it’s OK because a character in the book makes the point of what my rules are all about. He says: “I like a lot of talk in a book and I don’t like to have nobody tell me what the guy that’s talking looks like. I want to figure out what he looks like from the way he talks.”

3 Never use a verb other than “said” to carry dialogue. The line of dialogue belongs to the character; the verb is the writer sticking his nose in. But “said” is far less intrusive than “grumbled”, “gasped”, “cautioned”, “lied”. I once noticed Mary McCarthy ending a line of dialogue with “she asseverated” and had to stop reading and go to the dictionary.

4 Never use an adverb to modify the verb “said” . he admonished gravely. To use an adverb this way (or almost any way) is a mortal sin. The writer is now exposing himself in earnest, using a word that distracts and can interrupt the rhythm of the exchange. I have a character in one of my books tell how she used to write historical romances “full of rape and adverbs”.

5 Keep your exclamation points ­under control. You are allowed no more than two or three per 100,000 words of prose. If you have the knack of playing with exclaimers the way Tom Wolfe does, you can throw them in by the handful.

6 Never use the words “suddenly” or “all hell broke loose”. This rule doesn’t require an explanation. I have noticed that writers who use “suddenly” tend to exercise less control in the application of exclamation points.

7 Use regional dialect, patois, sparingly. Once you start spelling words in dialogue phonetically and loading the page with apos­trophes, you won’t be able to stop. Notice the way Annie Proulx captures the flavour of Wyoming voices in her book of short stories Close Range.

8 Avoid detailed descriptions of characters, which Steinbeck covered. In Ernest Hemingway’s “Hills Like White Elephants”, what do the “Ameri­can and the girl with him” look like? “She had taken off her hat and put it on the table.” That’s the only reference to a physical description in the story.

9 Don’t go into great detail describing places and things, unless you’re ­Margaret Atwood and can paint scenes with language. You don’t want descriptions that bring the action, the flow of the story, to a standstill.

1 Read it aloud to yourself because that’s the only way to be sure the rhythms of the sentences are OK (prose rhythms are too complex and subtle to be thought out – they can be got right only by ear).

3 You don’t always have to go so far as to murder your darlings – those turns of phrase or images of which you felt extra proud when they appeared on the page – but go back and look at them with a very beady eye. Almost always it turns out that they’d be better dead. (Not every little twinge of satisfaction is suspect – it’s the ones which amount to a sort of smug glee you must watch out for.)

6 Hold the reader’s attention. (This is likely to work better if you can hold your own.) But you don’t know who the reader is, so it’s like shooting fish with a slingshot in the dark. What ­fascinates A will bore the pants off B.

7 You most likely need a thesaurus, a rudimentary grammar book, and a grip on reality. This latter means: there’s no free lunch. Writing is work. It’s also gambling. You don’t get a pension plan. Other people can help you a bit, but ­essentially you’re on your own. ­Nobody is making you do this: you chose it, so don’t whine.

8 You can never read your own book with the innocent anticipation that comes with that first delicious page of a new book, because you wrote the thing. You’ve been backstage. You’ve seen how the rabbits were smuggled into the hat. Therefore ask a reading friend or two to look at it before you give it to anyone in the publishing business. This friend should not be someone with whom you have a ­romantic relationship, unless you want to break up.

On July 16, 2001, Elmore Leonard (October 11, 1925–August 20, 2013) made his timeless contribution to the meta-literary canon in a short piece for The New York Times, outlining his ten rules of writing. The essay, which inspired the Guardian series that gave us similar lists of writing rules by Zadie Smith, Margaret Atwood, and Neil Gaiman, was eventually adapted into Elmore Leonard’s 10 Rules of Writing (public library) — a slim, beautifully typeset book, with illustrations by Joe Ciardiello accompanying Leonard’s timeless rules.

These are rules I’ve picked up along the way to help me remain invisible when I’m writing a book, to help me show rather than tell what’s taking place in the story. If you have a facility for language and imagery and the sound of your voice pleases you, invisibility is not what you are after, and you can skip the rules. Still, you might look them over.